Diju: It’s all about confidence

Posted on February 12, 2010 by badmintonmania

No Indian pair in history has reached the heights that Valiyaveetil Diju and Jwala Gutta scaled during their dream year of 2009. Beginning the year ranked 38, the duo rocketed to No.7 on the back of some sensational results, including the defeat of world champions Nova Widianto/ Lilyana Natsir at the Korea Open Super Series. Most memorably, they ended the year on a high, returning with a silver at the season-ending World Super Series Masters Finals. Dev S Sukumar travelled to Diju’s hometown of Calicut and caught up with the affable shuttler as he enjoyed a brief lull before another hectic season: 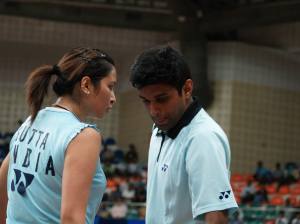 The last season was quite stunning, wasn’t it?
Of course. And to end it the way we did… we never imagined we would reach the final of the Masters. Everyone was saying it would be good to just participate; that’s what we also expected. It was a big thing just to play it.

What was the turning point?
Beating the world champions, Widianto and Natsir, in the second round of the Korean Open Super Series. That was the opening we got. We’d never beaten a top pair earlier. While playing the semis, we even believed we could win it. We almost beat the Thai pair, but a couple of close calls went against us.
My most memorable match was in the Chinese Taipei GP Gold semifinals. The match went for an hour and 20 minutes; at 18-all, after the rally, all four of us were so exhausted we couldn’t move. The third game went to 22-all. I started cramping; luckily that girl (Liu Ying Goh) netted her service and we won the next point.

What’s your on-court equation with Jwala like?
Jwala is extremely positive. She’s always upbeat. She’s like that on court too, that positive nature rubs off on me. There’s no one else like her. She’s very strong from the back, so I don’t need to worry. Her movement is not so great, but that’s something you can manage. She’s very crafty at the net. Aparna Balan, for instance, has great movement, but no strength. None of the other Indian girls have her confidence, or her strength. Ashwini Ponnappa is the only one who can come to that level.

Growing up, did you have a role model?
The person I admire most is Thomas Kurien. I’ve tried to follow whatever he did. His work ethic – he’s always on court at 6.30 in the morning, even if nobody else is there. I love practising with him. I room with him whenever I’m in Kochi.

The turning point in your career was when you decided to undertake the European trip last year…
In October 2008, Jwala, Chetan (Anand) and I decided to spend our money and attend the Bitburger, Bulgarian, Danish and Dutch Opens. The total budget was around Rs 1.8 lakh. I was a bit apprehensive, but I decided to go ahead. That was another turning point in our careers. We won the Bitburger Open and BAI (Badminton Association of India) also realised we were a good pair.

Is there a big difference between the way the top pairs think, and the others?
I can’t think of any difference in attitude. Between No.1 and No.20 all pairs are almost at the same level. The difference is only in confidence. It’s hard to explain. You just need to feel it. Vimal (Kumar) Sir kept telling me this before, but it’s only now that I’m realising exactly what he meant. We’re noticing that everybody is talking about us, which means we are at that level. We don’t allow the others to play their game. Indians can play mixed much better than doubles. But you need a partner like Jwala.

In terms of gameplan or strategy, are top-ten pairs more evolved than the others?
No, we don’t have any gameplan as such. For example, if there’s a left-right pair, we tell each other to be careful We just discuss some general points. Like, to be careful about the high serve and so on.
Mixed and doubles are entirely different. I’m only just beginning to understand that. In mixed, we play a bit more crafty game, you ‘keep’ more, close to the net. In doubles, it’s more about hitting. The main thing in mixed doubles is, after the smash, you’ve got to drive hard at the woman and then catch the next shuttle. The first smash can be to the man or woman, but the drive is hard for the woman to return.

Many of the top Chinese and Korean doubles players, like Xie Zhongbo, Zhengbo, Jung Jae Sung, are very muscular and heavy-set. Is it necessary for a doubles player to have that kind of muscle mass?
I don’t think it’s necessary. Their smashes are powerful, but not so powerful that we cannot return. Their style is to keep hitting. Our style is to hold back the returns, to play soft. We lose only when our defence is bad.

How do you work on each other’s confidence during a match?
We just remind each other if one of the opponents is a lefty. I tell Jwala to keep moving her feet. The feet always have to move first. In close games, 19-all or 20-all you have to particularly observe these things. I learnt that from Rupesh Kumar.
We just keep telling each other of the next point. I get a bit heated up from time to time. But Jwala won’t mind even I make a sharp remark. Confidence comes from winning tournaments. I don’t feel too bad even when we lose. It’s only when you’re about to win that you feel tension.

Is there something like form?
I haven’t felt anything like that. But you need luck. Sometimes you tap at 19-all, sometimes it goes in; sometimes out. You need that bit of luck for it to go in. You cannot play with the feeling that it has to go in. You just need to play for a point, not the game. When you’re at 11-0, you have to play for 12-0. At 19-all, you should not think there’s two points left; you should think of just that next point. We’ve lost from 17-11, but we’ve won from 11-17 as well.

What goals have you set for yourself?
This year is hectic. We have the Commonwealth, the Asian Games and the World Championships, apart from the Super Series. Then of course, there is the London Olympics in 2012. We’ve begun thinking about that.

Sometimes I wonder if I'm the Indian in Thoreau's Walden who makes cane baskets and is surprised nobody wants them. A. was talking about discipline when she said: "But Dev, if you want to move ahead in life, you'll have to be like that," and she may as well have defined everything else for me. I've played the low percentage game for too long to believe there's anything in it but the romance; the odds keep getting jacked up higher and higher; and you may be a good Idealist but a worse Fool.
View all posts by badmintonmania →
This entry was posted in interview and tagged diju, jwala gutta. Bookmark the permalink.

1 Response to Diju: It’s all about confidence